A Progressive Web App or PWA is a web application that has a set of capabilities (similar to native apps) which provide an app like experience to users. PWAs need to meet a set of essential requirements that we'll see next. PWAs are similar to native apps but are deployed and accessible from web servers via URLs, so we don't need to go through app stores.

A PWA needs to be:

In detail, this course will cover everything you need to build amazing PWAs leading to a score of 100 (out of 100) in Google's PWA auditing tool "Lighthouse".

For a long time, JavaScript has been the key element of the world wide web. Historically, it's been used for front end validations, dynamic menus, making some AJAX requests, etc.

But things have changed since the introduction of Single Page Applications (SPAs). React JS makes it very easy for us to create such SPAs.

Developers at Facebook released a completely different kind of framework called React (or ReactJS), which uses a combination of plain JavaScript and HTML elements (in XML syntax), called JSX. Unlike the Angular framework, this one simply addresses the View part of MVC. The main goal of a React application is to breakdown the entire web application into a bunch of HTML like elements called Components. A component defines the visual appearance of your UI, while converting the data it holds into user interface elements. 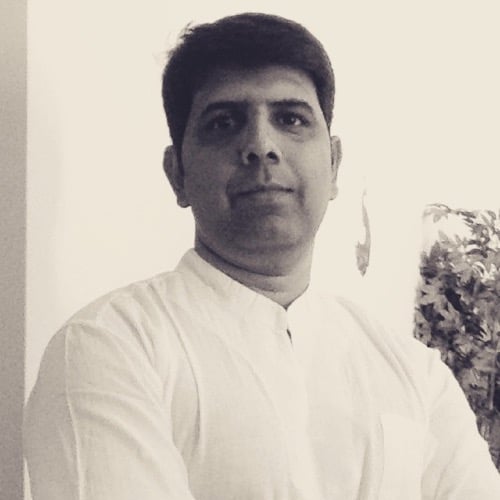 Hi. My name is Vinod and I am a software trainer, consultant and freelance developer in Bangalore, India.

Most of my professional life, spanning over two decades, I have taken thousands of classroom sessions on various technologies, some of which include Java, Hibernate, Spring framework, Spring boot, Micro services, Docker, Struts, JSF, NodeJS, MongoDB, and JavaScript frameworks like AngularJS, Angular, ReactJS, etc.