Ethical hacking tools will help you learn how to use android in penetration testing from scratch
4.4 (23 ratings) English (US) Instructor: Zaid Sabih 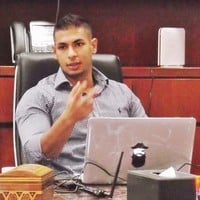