It is an online tutorial that covers a specific part of a topic in several sections. An Expert teaches the students with theoretical knowledge as well as with practical examples which makes it easy for students to understand.
A Course helps the user understand a specific part of a concept. While a path and E-Degrees are broader aspects and help the user understand more than just a small area of the concept.
A Course will help you understand any particular topic. For instance, if you are a beginner and want to learn about the basics of any topic in a fluent manner within a short period of time, a Course would be best for you to choose.
We have an inbuilt question-answer system to help you with your queries. Our support staff will be answering all your questions regarding the content of the Course.
﻿ 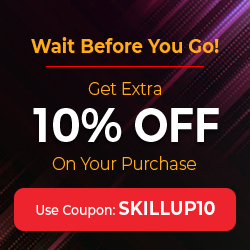