Developers no longer play a single role in development, they have become multifaceted, by playing designers, developers, coders, databases specialists, and so on. The days of a developer simply working on one aspect of developing an app or website is long gone.

In its initial stages, many companies including Facebook were only hiring Full Stack Developers - or developers who could work on the frontend, backend and everything in between. This resulted in apps and websites having a more clean and finished look, rather than pieces of puzzles simply put together haphazardly. But learning multiple technologies proved more difficult, with courses or tutorials teaching single technologies and having to stitch all those technologies together is a tedious and demanding task. This is why we have designed this Massive Course to help you become a Full Stack Developer.

What makes a Full Stack Developer?

A Full Stack is nothing but a combination of technologies that are used for designing and launching entire apps and websites. This could range from 3 to 4 different technologies, or in some cases even more. The objective is that the developer must be able to design the entire app from scratch.

There are five major aspects that one must look at when trying to become a Full Stack Developer - Frontend, Backend, Database, Cache/Memory and Version Control. These are exactly what we cover in the duration of this course.

This Massive 40+ hours course covers all the different segments that a developer must learn and seamlessly stitches it together to give the learner a wholesome experience. The developer will go through the entire five segments step by step, learning how to see the puzzle as a big picture rather than in pieces.

Our Full Stack Course breaks down the fundamentals of each technology that you would require to become a Full Stack Developer. The entire course is broken down into five separate segments: Frontend, Backend, Database, Other Essential Technologies and Debugging/Version Control. Each section includes multiple technologies to help you gain more experience as a developer.

Thats not all! There is even more. Each technology does not only include theory, but also practical examples - coding and projects. With this course, you will not only expand your skills but also bolster your resume. Lets look what you will learn in each of the different segments.

All technologies in this course will include theoretical as well as practical applications. A few of the different projects that will be covered include:

These are just a few of the 40 different apps that are part of this brilliant course. With this course, you will not only learn a whole lot of different technologies, but also become a complete developer.

So, what are you waiting for? Lets become a Master Developer with this Full Stack Web Development Bundle Course. 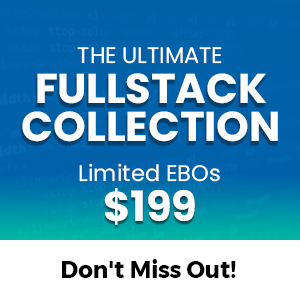